EpiBeat is excited to have Nikki write this guest post for us!  Nikki started her blog Scientifically Delicious about a year ago to write about the intersection between two of her passions: science and cooking.  She uses her background in biology to explain recent news and findings about food and specific ingredients in a fun and easy format.  She then develops and shares healthy recipes that are designed to be both tasty and to improve the body and mind. Enjoy!

Mounting evidence suggests that certain foods, such as green tea, contain bioactive molecules which can exert chemopreventive activity (meaning that they can prevent cancer) by regulating the epigenome. In this guest blog post, I will explain a bit about what epigenetics is, its role in cancer, and how our diet influences gene function and helps prevent diseases. Since we always try to be “Scientifically Delicious”, this post will also include a recipe for Green Tea Cupcakes, a sweet way to get an extra dose of green tea into your diet.

This figure shows how our DNA is packaged to fit inside our cells. The double helix of DNA is wound tightly around proteins called histones, which help to organize the DNA into structures called chromosomes that reside in the nucleus of the cell.

At the root of all cancers lie mistakes or changes made in our genetic code. Alterations in our DNA pattern, either caused by environmental exposure, diet, age, etc., can lead to changes in how our genes function. Nucleotide alterations, ranging from mutations (change in base pair), to deletions (removal of gene) or amplifications (increase in gene level), can promote uncontrolled growth when they occur in genes that regulate cell division, much like cutting the brake lines on your car.

Importantly, gene function can also be altered by processes that do not involve a change to the DNA sequence. One example of this is through epigenetics, the process by which chemical reactions affect how genes are regulated. If we think of a gene as being turned on or off like a light bulb, epigenetics can be compared to a dimmer switch. By shifting the switch, you can control how much light is produced in a room, or in a cell’s case, how high or low the gene is expressed. Epigenetics are heritable changes, meaning that we are born with a certain pattern of epigenetic marks, which help to control many aspects of our cell’s behavior. These include, but are not limited to, how a cell evolves, as well as its growth and death. These marks are dynamic and will continue to change as we grow and in response to our environment and diet. Furthermore, these changes can be passed along to our children and our children’s children…something to think carefully about as we learn more about the connection between diet and the epigenome.

Some examples of epigenetic marks are DNA methylation and histone acetylation. Chemical modifications made to our nucleotides can influence how accessible the DNA is to the cell’s machinery that drives expression. DNA methylation, which is the process of adding a methyl group to the C and A nucleotides, can cause DNA to condense, thereby leading to less expression of that specific gene. In cancer cells, it has been shown that many genes which are required to halt cell growth are often silenced via increased methylation.

Our DNA is wrapped around histones (blue spheres) and organized into structures called nucleosomes. Chemically-added tags such as methylation (red circles) can affect how open the DNA is to the cell’s machinery and consequently, how high or low a gene is expressed.

More recently, it’s become apparent that many dietary agents contain bioactive ingredients, which can regulate the epigenetic machinery. For example, turmeric, soybeans, green tea, grapes, and cruciferous vegetables, such as broccoli and cabbage, have all been shown to possess compounds called polyphenols, which can affect the level of DNA methylation in cells.

In an article published in Cancer Research, several scientists tested whether a polyphenol found in green tea called (-)-Epigallocatechin-3-Gallate (or EGCG for short) could inhibit DNA methylation at specific cancer-related genes in human cancer cells. They went on to show that at increasing doses, EGCG can inhibit the activity of an enzyme called DNMT1, which is responsible for adding methyl groups to DNA nucleotides. Furthermore, the authors show that treatment of several cancer cell lines with EGCG restored the expression of various genes that play a role in pumping the cell division cycle’s breaks, including p16, RARb and MLH1. Moreover, cancer cells treated with EGCG over the course of a week showed signs of slowed cell division – a sign that the cancer was being stopped.  While these results are very interesting, more research is needed to further characterize the anti-cancer properties of EGCG.

So, should we start guzzling green tea morning, noon, and night? One issue to think about is how much EGCG is needed for its anti-cancer affects and whether this level be reached by drinking green tea alone. The research shows that inhibition of DNMT1 occurs in cells that are treated with a dose of at least 20 mM EGCG. The scientists comment that while this concentration is present in a cup of green tea, it’s hard to determine whether this level can be reached at cancer sites within our bodies. It’s also important to point out that extreme inhibition of DNMT1 may also cause global decreased gene expression, which could potentially produce unwanted side effects.

In conclusion, this work indicates that adding green tea to your daily diet may be beneficial. Green tea is also touted for its rich antioxidant power, suggesting that this herbal chemopreventive may work through multiple paths to help keep you healthy.

You may now be wondering about some creative ways to incorporate more green tea into your diet besides the usual steep. The cupcake recipe that follows was originally inspired by two great blogs: Paleo in PDX and Detoxinista and I’ve made some minor adjustments to help give your green tea intake a boost. If you haven’t worked with coconut flour before, this is a great low-carb and gluten-free substitute for regular baking flour. The use of honey in this recipe gives the cake a sublime sweetness that blends well with the green tea flavor (perhaps because these two also pair so well in a cup of tea?) and the matcha powder provides a subtle green tea flavor, which doesn’t overpower the coconut.

On its own, this cupcake is low-to-medium on the sweet scale and the coconut icing helps to brighten it a bit. In addition to being a treat for dessert, I think this cake would make a perfect breakfast, served alone or paired with a pot of freshly brewed tea. I served these cupcakes at a recent party and they were met with much success! The cake stayed very moist and the icing held up even after being stored in the refrigerator overnight. The top compliment I received was that these cupcakes tasted so good in a healthy way, with the green tea and coconut notes really shining through.

I hope you enjoy this recipe and please feel free to leave a comment to let me know what you think and how your cupcakes turned out!

Want to learn more about eating Scientifically Delicious for cancer prevention? Check out these other popular cancer-related posts on my blog:

Soaking up the Competition - Circular RNAs as Molecular Sponges for miRNAs 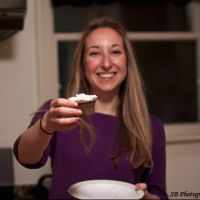 Nikki was born in Pittsburgh, PA and earned her Ph.D. in Biochemistry and Genetics at the University of Pittsburgh in 2009. She currently resides in Salem, MA and is a post-doc at the Dana-Farber Cancer Institute where her project focuses on uncovering new cancer cell vulnerabilities and targeted therapies. When she's not knee deep in experiments or researching new blog topics, she enjoys running, hiking and spending time with family and friends.