The Nobel Prize in Medicine was recently awarded for the 2006 discovery of the ability of somatic cells to be reprogrammed into a pluripotent state. The award highlights the tremendous impact of induced pluripotent stem cells (iPSCs) on the field of medicine in just a few short years. However, little is known about DNA methylation variation in iPSCs amongst different donors. Recent studies have shown that iPSCs retain tissue-specific DNA methylation profiles at early passages. The tissue-specific methylation pattern is usually erased after several passages and becomes more similar to the DNA methylation pattern of embryonic stem cells (ESCs). A recent report from Shao et al. shows that there are also donor-derived epigenetic differences in iPSCs.  The authors conclude that in future studies it might be more appropriate to investigate the DNA methylation pattern of iPSCs derived from different donors rather than multiple clones from a single donor.

The authors reprogrammed mesenchymal stromal cells (MSCs) collected from bone marrow. They then used an array to assess DNA methylation status at over 450 thousand CpG sites and compared iPSC methylation patterns to those of ESCs and the parent cells. Reprogramming of MSCs resulted in globally hypermethylated profiles relative to parent cells and had a median methylation level at all CpG sites similar to ESCs. The authors sought to investigate the extent to which DNA methylation profiles of iPSCs vary amongst individuals. They found that donor-derived variation in methylation status was preserved in locations outside of CpG islands and promoters. These variations act as an “epigenetic fingerprint” left behind from the donor cell. Additionally, induced pluripotent cell clones from the same donor clustered together in the analyses, suggesting that there is little intraindividual variation in methylation profiles.  However, the methylation patterns of iPSCs at pluripotency-related genes more closely resembled those of ESCs than of the parental cells. The authors also found that methylation states at these gene regions were highly reproducible amongst cell preparations. Therefore, the investigators concluded that methylation status at individual CpG sites may be tightly regulated.

Taken together, these findings suggest that reprogramming of MSCs results in an overall methylation profile more similar to embryonic stem cells than to parental cells. However, induced cells maintain donor-derived modifications, especially in locations outside CpG islands and promoter regions. The authors suggest that future studies should account for these donor-derived epigenetic differences by comparing cells prepared from different donors rather than clones from the same individual.

I’ll See Your Double Helix and Raise You One! 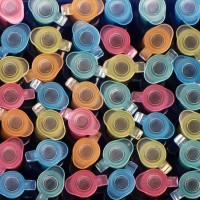 Emily was born and raised in Southern California. Outside of the lab, Emily enjoys exploring museums, going to concerts and traveling.